How Dinosaurs Turned Me Against the Numbers Game

Know how it is when you try to be the nice guy, think you’re acting like a grown-up and all, and you give someone the benefit of the doubt, just to have them walk all over you while insisting they’re only helping you out?

Used to be I taught my workshops and courses based on these views and assumptions.  I gave the benefit of the doubt.

But then I, as a member of society, a consumer of information, an information professional, and a lawyer, got walked on by a pack of increasingly agitated and overweight dinosaurs. 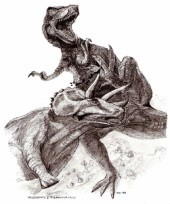 So here’s the deal:
The purpose of copyright law – as stated in the U.S. Constitution – is to promote creativity, innovation, and the growth of the body of works and human knowledge.

We go about doing that by – as stated in the U.S. Constitution – striving to maintain a balance between, on the one hand, granting rights to copyright owners for the purpose of incentivizing them to create; and, on the other hand, placing limits on those rights for the purpose of allowing others to build on protected works and themselves create new ones.

All without the cost or burden (or uncertainty) of obtaining permission to use those works.

Fair use allows us to be a democratic and educated society.

Yes, it really is that pure and simple.

But, like so many things we hold dear (think “chocolate”), the very thing we love can cause us grief for the same reasons we love it.  Determining whether a particular use constitutes a fair use can be complicated and uncertain.  Humans being like certainty; we like knowing we can rely on something.

And that is where the dinosaurs and my anger come in.

In an attempt to provide some degree of certainty and comfort, various “guidelines” have been put forth over the years intended to help interpret and apply fair use to certain specific situations.  These guidelines provide quantitative limits on uses that are meant to articulate a minimum of what would constitute fair use.  In some cases, the guidelines were the result of “negotiations” between representatives from both sides of the scale.  In some cases, draft guidelines from failed negotiations are widely used, despite their strict proscriptions and lack of flexibility, which led to the failed negotiations.  In other cases, guidelines are more like best practices compiled by entities within an industry.

I have taught copyright workshops and courses for roughly twenty years, primarily to librarians, educators, and library school students.  As lawyer, I teach the need to assess risk and consider your institution’s risk tolerance (a necessity due to the sometimes uncertain nature of fair use).  As a librarian, I advocate for user rights and encourage thinking about fair use as an expander rather than a limiter.

I know that, generally speaking, librarians tend to be risk-averse (often because they are taught to be, by a variety of means).  In my training, I used to present the content of the guidelines and emphasize that they describe a minimum, not maximum, of what would constitute fair use and that the bottom line question is whether allowing the use at issue would go further towards promoting the goal of copyright law than would disallowing the use.

I taught respect for copyright owner rights while encouraging the exercise of user rights; I taught maintaining the balance.

I felt that I was taking a balanced, middle-of-the-road approach.  After all, each institution has to do decide for itself what the most appropriate policy is regarding fair use (and other copyright issues).

I felt I was playing the game like a grown-up: Sure, the interests of copyright owners sometimes conflict with the interests of information users, but there’s nothing inherently wrong in that.  To the contrary – that’s the way the system was built.  The only “wrong” is when the balance gets out of whack.  Why not give the benefit of the doubt to the dinosaurs and assume we could all play nice together?

Then two disturbing trends in recent years began to tilt my own balance in this regard: (1) an increase in the amount of biased and too often downright misleading information about fair use being put forth by the copyright ownership industry; and (2) reliance by educators and librarians on this information.

The ground began to rumble.

I started to include in my lessons discussion of the need to think critically about the source of your information, just as we teach our own students.

The trends continued and grew.  I became increasingly irritated at what increasingly seemed to me to be a sneaky way of trying to convince the general public (including children), librarians, and educators that the scope of fair use is very limited indeed, to the point of never rising above the quantitative limits put forth in guidelines, and, even worse, that “The best course of action is simply to seek permission for all copied material you intend to use.”

Given that fair use is a (1) subjective analysis that involves (2) risk assessment, which, by definition, means that (3) the appropriateness of ultimate decisions to use or not will be different for different institutions; how on earth can The Copyright Society of the USA know what “the best course of action” is for my — or your — institution?!

The ground began to quake.

Now the dinosaurs were stampeding across my back.

And I wanna get medieval on their …
…evil ways.

And, most importantly, I explain that, as much as I hate labeling “bad guys” and “good guys;” as strongly as I believe that reducing much of any situation to such extreme dualities is counterproductive…

Make no mistake about it, there is an absolute war out on fair use right now.

The dinosaurs are leading the charge, and dinosaurs are big; they are heavy; these particular ones are aggressive; and even though we cannot see their pockets, they are deep.

Those of us representing information users (who are comprised of the public at large) often feel that we are tiny in comparison.  We feel that we do not have the weight of dinosaurs; that we are not so aggressive; and that our pockets are sometimes non-existent.

An elephant can trumpet and shake the earth but not the self-possession of the ants who hold it.
— Alistair Cooke, Letter from America, 24 March 1968.